A general perception in the industry is that the normal expected lifetime of LEDs is 100,000 hours of operation. This perception, while not always true, comes from years of testing of LEDs under controlled laboratory conditions, then utilizing the data collected to make a lifetime projection. In real world applications the primary factors that affect the operating life of the LEDS are temperature and drive current.

There are two temperature factors to consider one being the ambient temperature that the product is expected to experience, the other is the LED operating temperature. The operating temperature is derived from the ambient temperature and LED self-heating based on the current at which the LED is being driven. Manufacturers in most instances have little control over the operating ambient; however they must be aware of the expectations.  Manufacturers do have full control, while designing a product, over the current level that the LEDS will be driven, the heat generation as a result, and the thermal management design of the product.

LED manufacturers now have several industry standard procedures available for testing LEDs that provides information that allows lumen maintenance or useful lifetime projections of the LEDs in an application. These procedures, developed under the guidance of the Illuminating Engineering Society of North America (IESNA), include IESNA LM-80, LM-79, and TM-21 reports.

The next report, LM-79, is generated by the actual operation of an LED fixture under controlled conditions. . LM-79 calls out appropriate procedures for “Electrical and Photometric Measurements of Solid-State Lighting Products”. It prescribes methodologies for the measurement of total flux, light distribution, electrical power, and color. When LM-79 testing is combined with UL /ANSI 1598:2008 In-Situ (ISTMT) temperature measurements, the LED drive current and package temperature are measured.  Dialight, under lab code 201033-0, is able to generate NVLAP- accredited LM-79 photometric reports that help validate the performance of its innovative LED lighting solutions. This represents the highest standard of accreditation for LED luminaire testing. Dialight is also able to generate accredited in-situ (ISTMT) temperature measurements necessary for validating its industry-leading performance warranties.

Lastly is the TM-21 report. The TM 21 calculation takes the light output verses temperature and drive current data from the LM-80 report and combines this information with the LED drive current and In-Situ temperature information from the LM-79 report to project lumen depreciation for the LED assembly. An end result of the TM-21 report is the projected L70 point of the LED assembly. L70 is defined as the point at which the LED output has depreciated to 70% of the initial output and may be considered the LED end of useful life.

Dialight has designed the new long life LED Traffic Signal devices to far outperform any current LED traffic signal assembly offered in the market today. This new product is offered with a 15 year warranty and a 20 year expected life. To achieve this, the selection of LEDs, the operating current of the LEDs and the LED heat-sinking played a vital role in the overall design. Manufacturers of LEDs are now producing high power LEDs that are capable of 1000 mAmps (mA) operation for extended periods of time. With the optimal LED configuration design, Dialight’s ITE compliant LED traffic signal modules are designed with LEDs operating at less than half of those currents. Combine this lower operating current with enhanced heat-sinking of the LED printed circuit board and the result is a very low temperature rise by self-heating.

The standard ITE operating temperature for testing purposes is in a split chamber where the temperature in front of the signal lens in 49o C and the temperature on the rear of the module is 74 o C. For this evaluation Dialight tested the yellow long life LED traffic Signal Head at the prescribed ITE temperatures. The yellow traffic ball was selected for test since it is operated at the highest LED drive current, resulting in the “worst case condition” for lumen depreciation. After thermal stabilization the measured LED source temperature (Ts) was 101 o C.This was the In-Situ temperature used for the TM-21 calculation. Since the LM-80 reports from the LED manufactures cannot test for all potential drive currents, TM-21 requires that the next higher drive current, which in this case is 500 mA, be used from the LM-80 reports for the calculation. The chart below graphically shows the output from the TM-21 calculator for the projected life of the Integrated LED traffic Head. 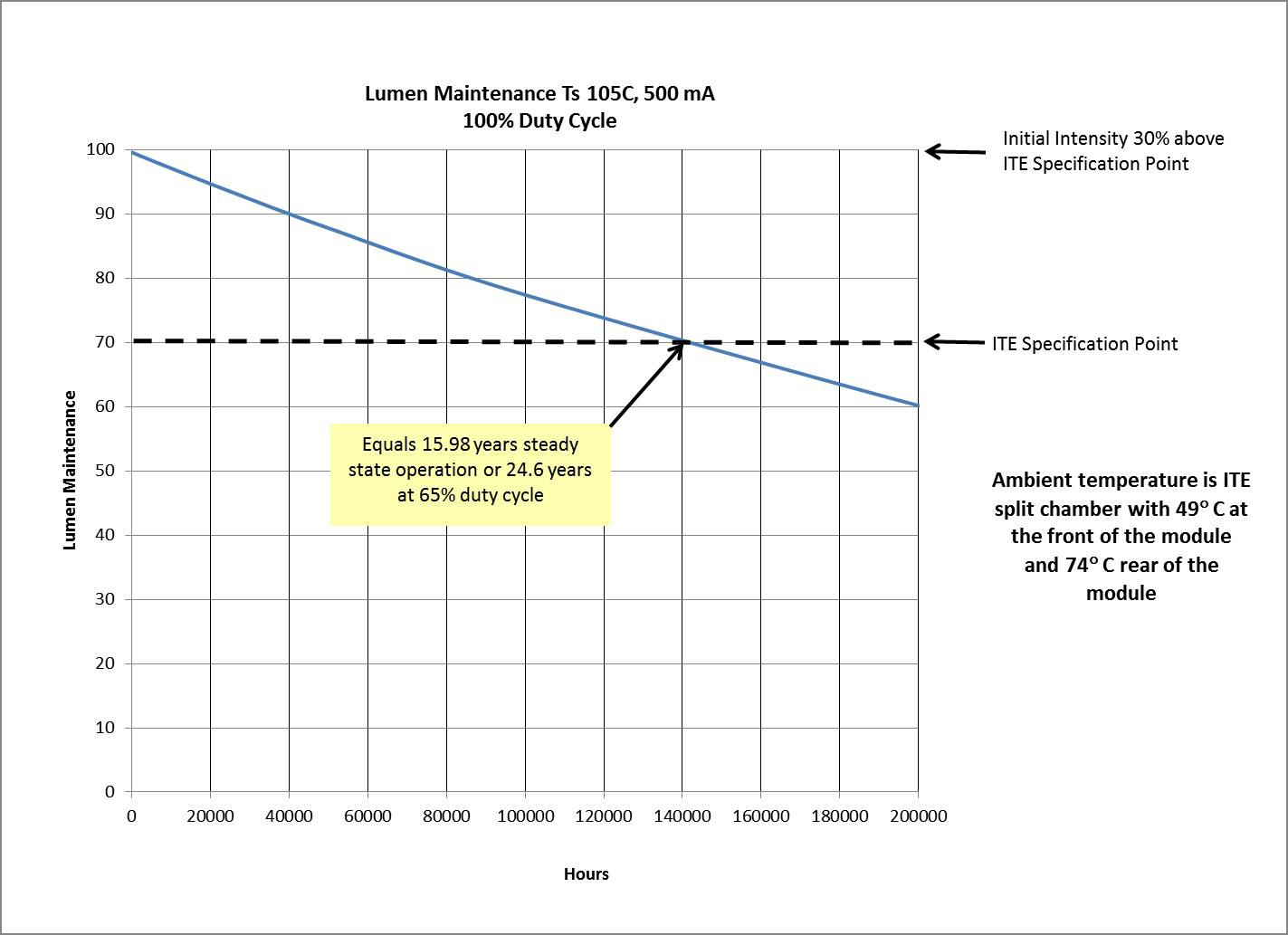 This chart shows a projected L70 for the long life traffic signal of approximately 140,000 hours when operated at a 100% duty cycle. This represents the absolute “worst-case” temperature and drive current and still equates to almost 16 years of projected life of the LED. In reality no LED traffic signal is operated at 100% duty-cycle. If you assume a worst case 65% duty cycle at an intersection with stop bar detection then the 140,000 hour would equate to slightly less than a 25 year projected life.

Beyond the simple operating temperature sensitivity the current at which LEDs are operated also has an impact on their life. Since most products are sold in highly competitive markets, overall cost becomes an important issue. In this case the issue related to current density within the LED chip and the impact on small localized areas within the chip that would see an uneven distribution of the current as the current increases. This current density at localized sites results in the LED developing a natural wear out mechanism at the higher current density sites. Manufacturers will often determine what the expected product life would be then design the system to operate with as few LEDs as possible and drive the LEDs at a current that would be high enough to achieve the expected lifetime while complying with the necessary specifications. A module design for a product with a 5 year warranty would typically target a 6 – 7 year expected life and contain much fewer LEDs being driven at higher currents than a similar product that is targeted for an expected 20 year life.

LEDs are meant/designed to stay longer. These are of less concern these days. Power Supplies are complicated and strictly speaking determine the life of a lighting system. There are several factors effecting the reliability and longevity of power supply. These are random failures, failures due to harsh conditions, natural wear out, power processing losses, thermal fatigue, component stress, excessive noise, and unwanted conditions such as surge.

Dialight R&D team has been working over years to understand the random failures, failures due to harsh conditions, natural wear-out, power processing losses, thermal fatigue, component stress, noise on board, and un-wanted conditions such as surge, all factors effecting reliability and longevity. When it comes to reliability and longevity, people usually talk about MTBF (Mean Time Between Failures) and MTTF (Mean Time To Failures) estimations. However, these are not sufficient to fully determine the life of a lighting system. MTBF tells about the random failure of components but doesn’t estimate the life, in particular when a lighting system is subjected to variable and extreme conditions. On the other hand, MTTF measures average time to failure but alone is not useful for predicting true life of a lighting system. MTTF calculations, where individual components Failure in Time (FIT’s) are summed, are only valid during constant failure rate portion of the product life, which is bottom of ‘Bathtub’ curve. 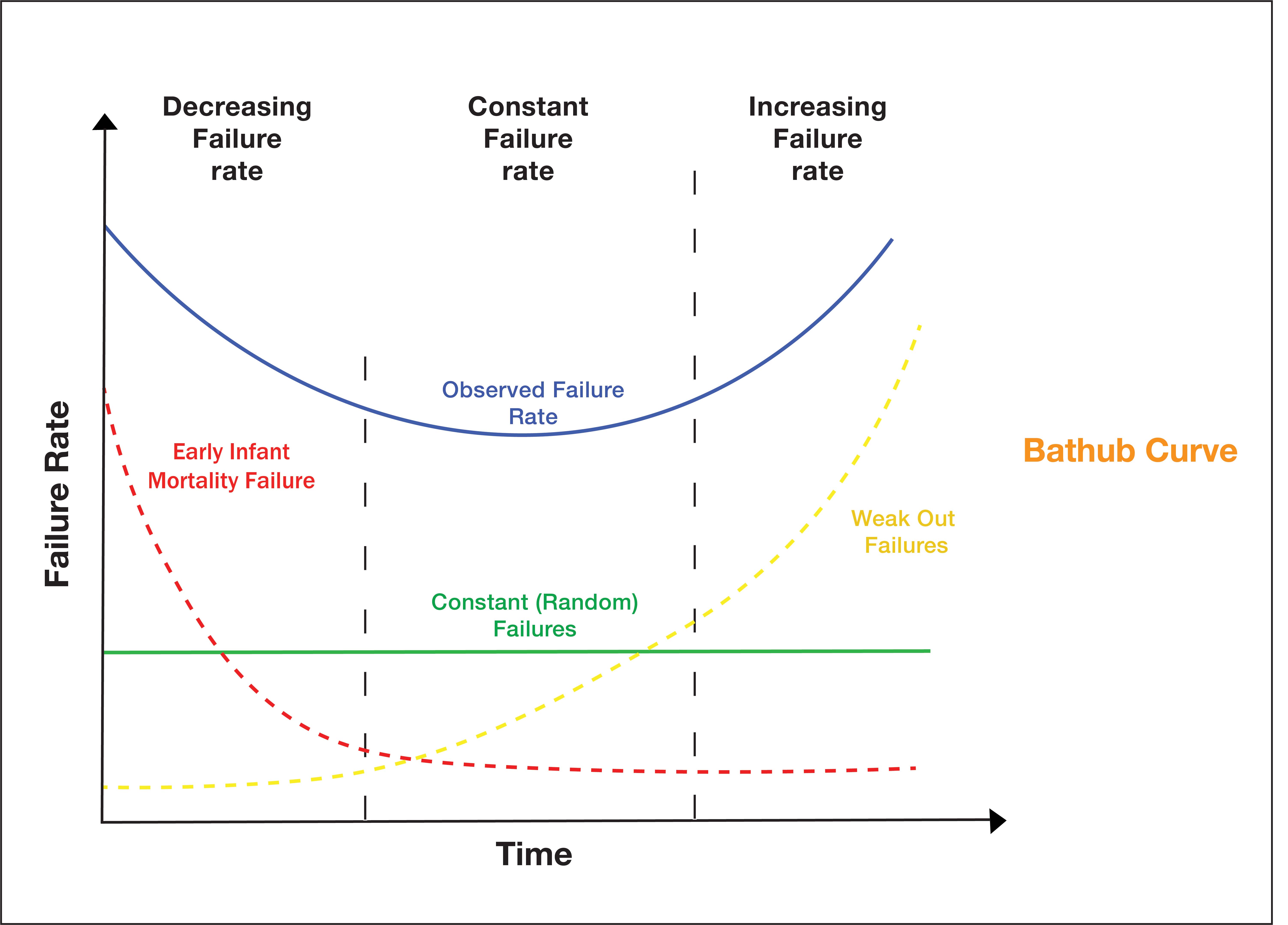 Power Supply is generally considered a weak link in a lighting fixture system. Dialight has a mission to change this perception in the industry by offering ultra-efficient, long life, and reliable drivers. Dialight, using home-grown Patent protected techniques and industry proven topology has developed a power supply design for Next Generation Traffic products which ensure lifetime of 20-Yrs. This robust design is fully backed by our in-house Accelerated Life Test (ALT).

There is no magic or overnight formula. Dialight has adopted following scheme to reach the Holy-Grail of 20-Yrs Life 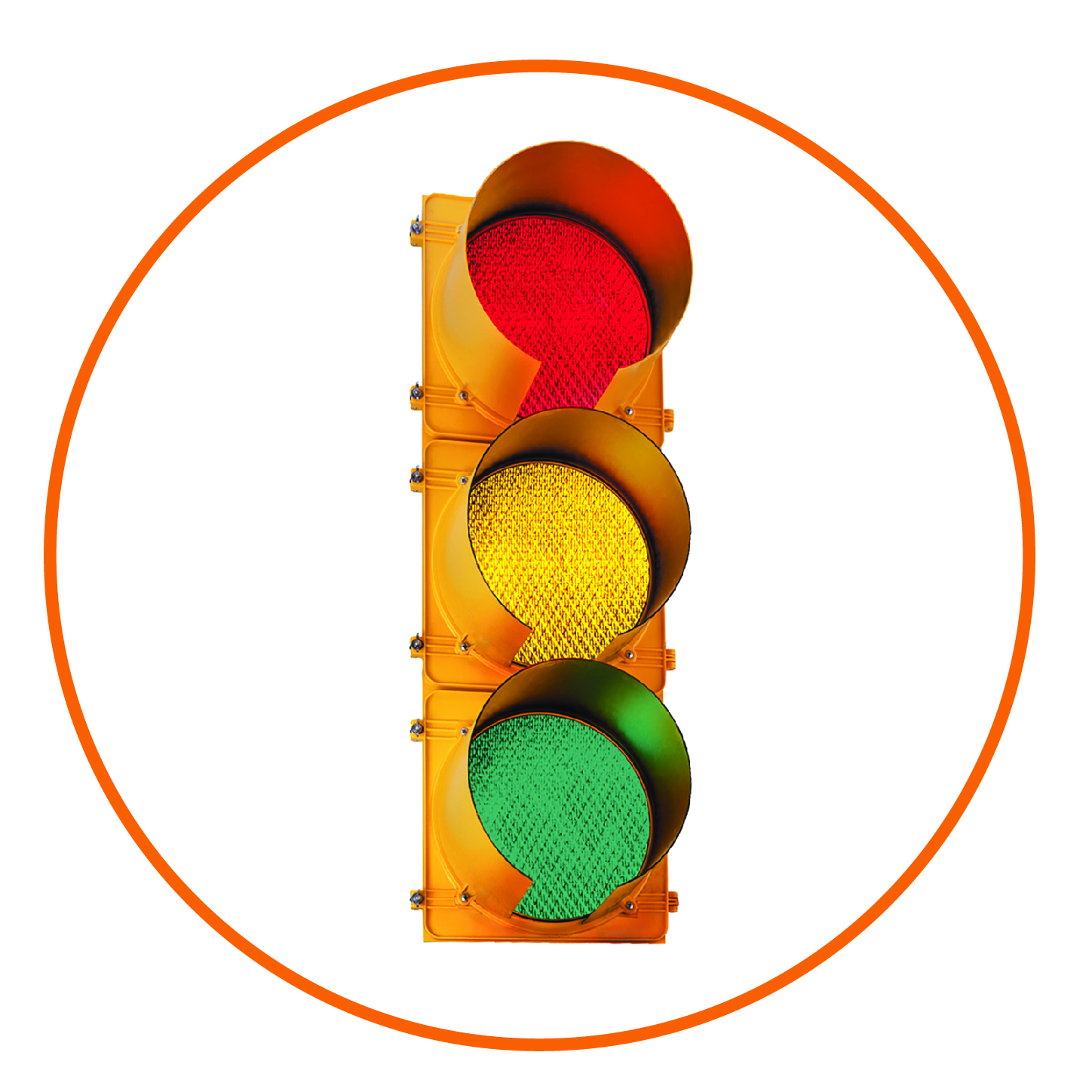 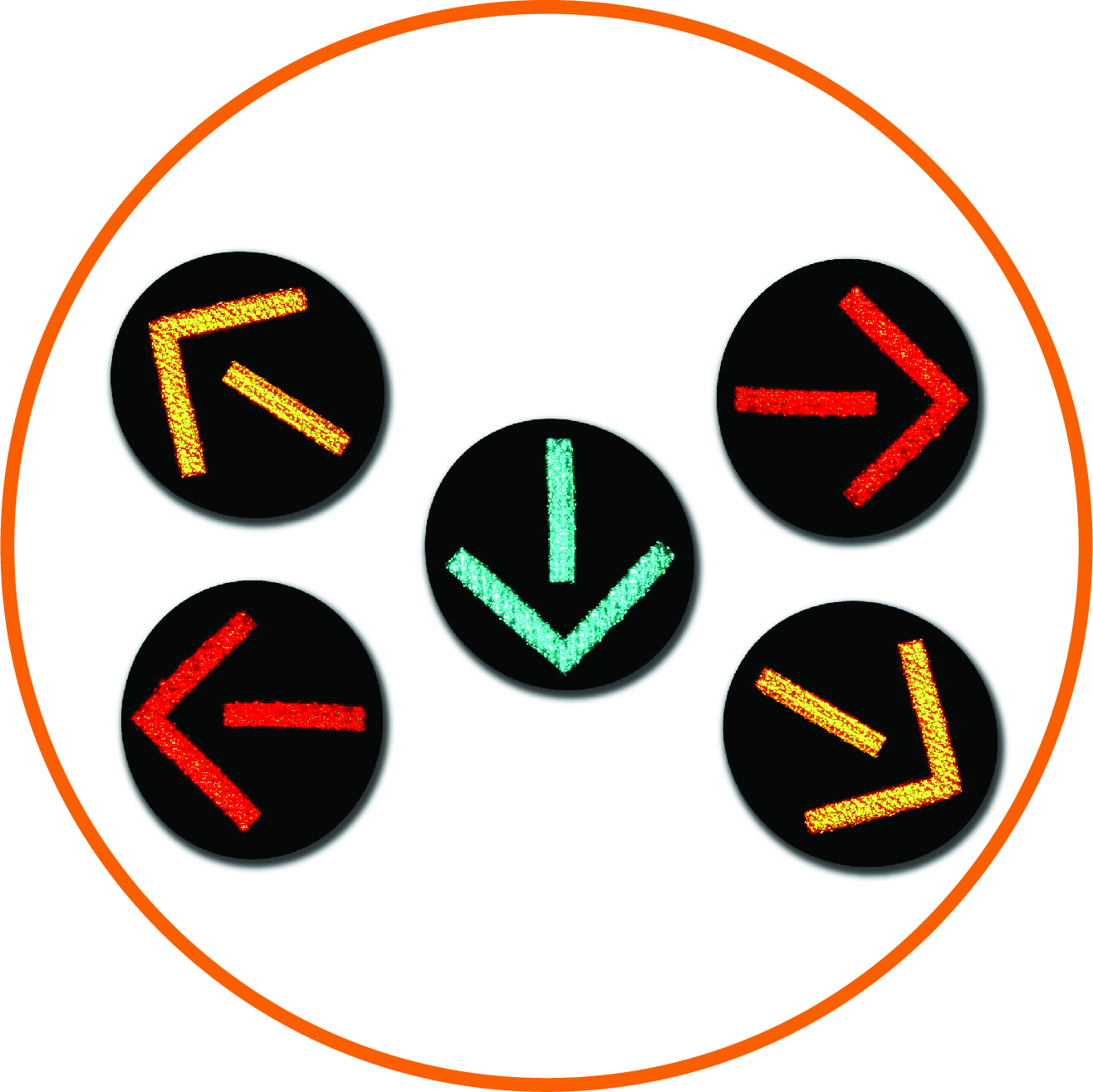